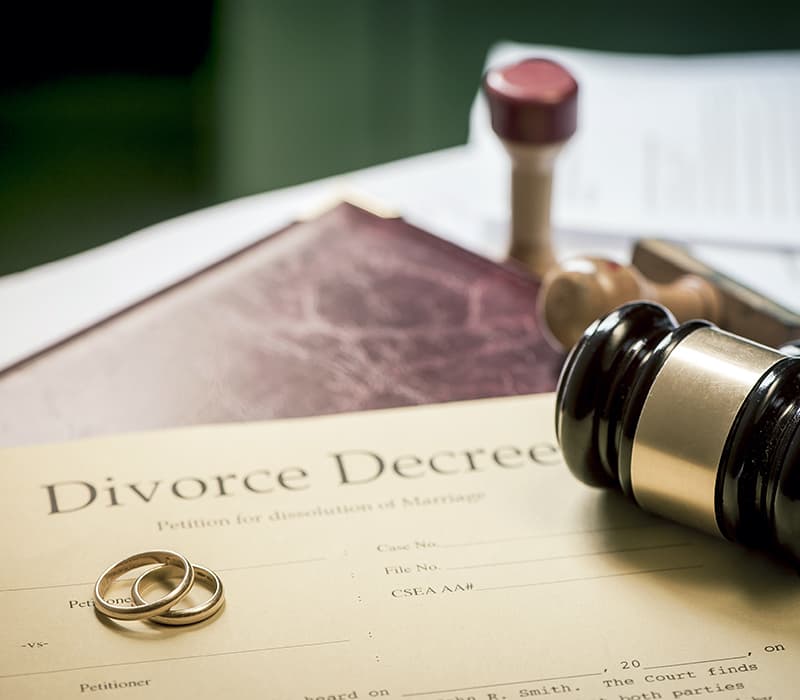 “Until death do us part” – that is the promise that is often made during a wedding ceremony. Unfortunately, the harsh reality is that many marriages do not make it that far. At some point, for whatever reason, either one of the parties or both of them may decide that they no longer want to be married. Once the party or parties' commitment to this decision becomes serious enough, a divorce (a/k/a “dissolution of marriage”) case is initiated.

With regard to divorce, Florida is a “no fault” state. This simply means that you do not have to prove that your spouse is to blame for your marital problems in order to obtain a divorce. In fact, in most cases, the assignment of fault to one party or the other is totally irrelevant.

The most common types of divorce are as follows:

Uncontested Divorce (most can be done in approximately 30 days)

The simplest, quickest and most cost effective (in terms of attorney fees) type is the uncontested divorce (also known as an agreed divorce). In this type, an agreement has been, or very likely will be, reached between the husband and the wife which amicably resolves all of the issues of their divorce. This includes, but is not limited to, child custody, visitation, child support, spousal support, and the distribution of assets and debts, as applicable. It is important to note that no one is served papers in an uncontested divorce. The voluntary cooperation of the parties in signing the paperwork is a prerequisite for the filing of this type of divorce.

A single attorney can often be used to draw up the paperwork and thereby save the parties both time and money. Assuming that both parties cooperate by providing all of the necessary information to the attorney and by signing the required documents in a timely manner, the divorce can be filed very quickly and, in most cases, can thereafter be finalized within approximately 30 days. Only one of the parties is required to appear at a hearing in order to get the Final Judgment, which finalizes the divorce. This judgment will incorporate all of the terms of the parties' agreement.

Another type of divorce is the contested divorce. In this type, either one of the parties is unwilling to cooperate or the parties are unable to reach an agreement on one or more important issues. Due to the often complex nature of contested divorces, each party will normally hire their own attorney to assist them with the case.

The first party (the “Petitioner”) initiates the divorce by filing a petition and several other necessary documents with the court. The petition is then served on the second party (the "Respondent") by a sheriff or a process server. The Respondent then has 20 days to file a response to the petition. If the response is not filed within the 20 days, then a default may be entered against the Respondent. If this occurs, the divorce can usually be finalized very quickly and the Petitioner will often get everything that he or she is requesting, so long as it is reasonable.

In most cases, however, a response will be filed by the Respondent within the 20 days. The parties then exchange financial documentation (called “discovery”) over a period of approximately 30 ‑ 45 days, after which time a mediation is normally scheduled. A mediation is a relatively informal meeting or conference where the parties and their attorneys have the opportunity to sit down together and try to resolve all of the issues related to their divorce with the assistance of an impartial mediator. (It is important to note that the mediator does not actually have any authority to decide the issues of the case. He or she simply acts as a facilitator and tries to help the parties reach an acceptable compromise in their case). If all issues are resolved at the mediation, then a formal agreement can be drawn up and signed by both parties and the case can quickly proceed to a final hearing just as if it were an uncontested divorce.

If there are issues that cannot be resolved at the mediation, then the case will typically proceed toward a trial (which may not take place for several weeks or months after mediation) where each party is able to present evidence, call witnesses, and give testimony in front of a judge. After hearing both sides, the judge will make a final decision regarding all of the issues, which will then be written down in the Final Judgment. This judgment will be binding on both parties.

If one party wants to get divorced, but their spouse can no longer be located, he or she can do so by filing a publication divorce. In order for this type of divorce filing to be successful, the "missing" spouse must normally have been gone for a significant amount of time (usually more than one to two months) and the Petitioner (the party who is requesting the divorce) must make a diligent search to locate the spouse. This search normally includes such things as questioning the missing spouse's friends and family, checking the spouse's last known residence and employment addresses, performing an internet "people finder" search, checking local hospitals and prisons/jails, checking with the post office and the department of motor vehicles, and calling 411 information.

Once the diligent search has been completed and the missing spouse has not been located, the publication divorce case can be filed. A notice of the divorce filing is thereafter posted in a local newspaper for four consecutive weeks. Assuming that no response is filed by the missing spouse during this four week period, a default will be entered and the case can quickly proceed to a final hearing, where the judge will sign a Final Judgment divorcing the parties.

“Family law” is an area of law which, in addition to divorce, covers all aspects of family and domestic relationships. Issues such as child custody/visitation, child support, alimony, asset and debt distribution, prenuptial agreements, restraining orders, paternity actions and adoptions all fall within this area.

Determining which parent a minor child is primarily going to reside with and exactly how the non‑custodial (secondary) parent is going to exercise his/her visitation rights is often one of the most important aspects of a case. The child's current and future needs must be taken into careful consideration, as well as each parent's relative living condition, financial status, availability and overall caretaking skills.

Under Florida law, both parents are normally required to financially support a minor child until the child reaches the age of majority (18 years) or, if the child is still in high school at the time, until the child either graduates or reaches the age of 19 years, whichever occurs first. Florida law typically mandates that the non‑custodial parent pay an amount of child support to the custodial parent in order to accomplish this goal. The amount of child support is calculated based on the parties' relative incomes, as well as some other factors, and must be consistent with the state‑established guidelines.

There are several types of alimony (a/k/a spousal support) that can be awarded by the court. These are lump sum (usually a single payment), rehabilitative (a/k/a temporary or “bridge the gap”), and permanent periodic (normally paid until the receiving spouse remarries or either party dies). Whether alimony will be awarded in a case is determined based upon a number of factors including, but not limited to, the duration of the marriage, the age and physical/mental/emotional condition of each of the parties, the standard of living established by the parties during the marriage, the financial resources/income of each party, and the liabilities/expenses of each party.

A prenuptial agreement is a document that can be executed by couples who are contemplating marriage in order to protect themselves financially in terms of property ownership, asset/debt distribution, and alimony should an eventual separation/divorce occur. Each party must provide full disclosure of their assets and finances to the other and must thereafter sign the document freely and voluntarily.

If domestic violence has occurred or may be likely to occur within a relationship, the threatened party can apply to the court in order to obtain a restraining order (a/k/a an injunction) against the threatening party. The party requesting the restraining order must normally convince the court that they may be in imminent danger of bodily harm. The court will then issue a temporary restraining order, which can thereafter be extended indefinitely if good cause is shown.

If a child is born out of wedlock, a court‑ordered finding of paternity is required to establish the legal rights and responsibilities of the father. The issues of the child's custody and visitation, as well as the amount of child support to be paid, are all determined within the scope of the paternity action. In addition, if either of the parties objects to the alleged father being the actual biological parent of the child (and therefore having all of the rights and responsibilities of a parent), a paternity test can be administered so as to verify whether or not this is actually the case.

Although there are several different types of adoptions, our offices handle mainly step‑parent adoptions. In a step‑parent adoption, one of the child's biological parents has re‑married and his/her new spouse wishes to assume all of the legal rights and responsibilities associated with being a parent of the child. The adoption serves to terminate the parental rights and responsibilities of the other biological parent and is normally done after obtaining that parent's full and informed consent.

Questions? We're Here To Help!
Contact Us For A Free Consultation